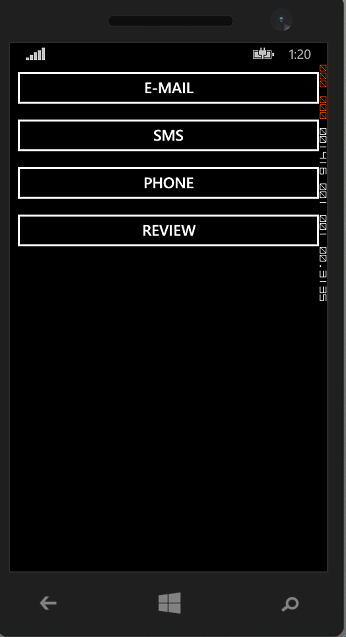 Sending Email, SMS, making calls and giving reviews to the applications are very useful and common controls which you will find in different applications. These controls are also known as Launchers & Choosers and are available in the name space Microsoft.Phone.Tasks.

There are many marketplace controls available in Visual Studio 13 but here in our application we will use 4 of them namely , email,sms,phone and review.

Just create a new empty windows phone (SilverLight) application and named it as marketplace_controls or whatever you want.

Add four buttons and name them respectively, you can use the names of my demonstrated application also (as shown in the figure).  So lets begin with the code.

What you have to do is that assign a click event handler to all of the buttons and in each button place the following codes respectively:

Bilal Amjad Featured as Speaker in Startup Weekend in Lahore